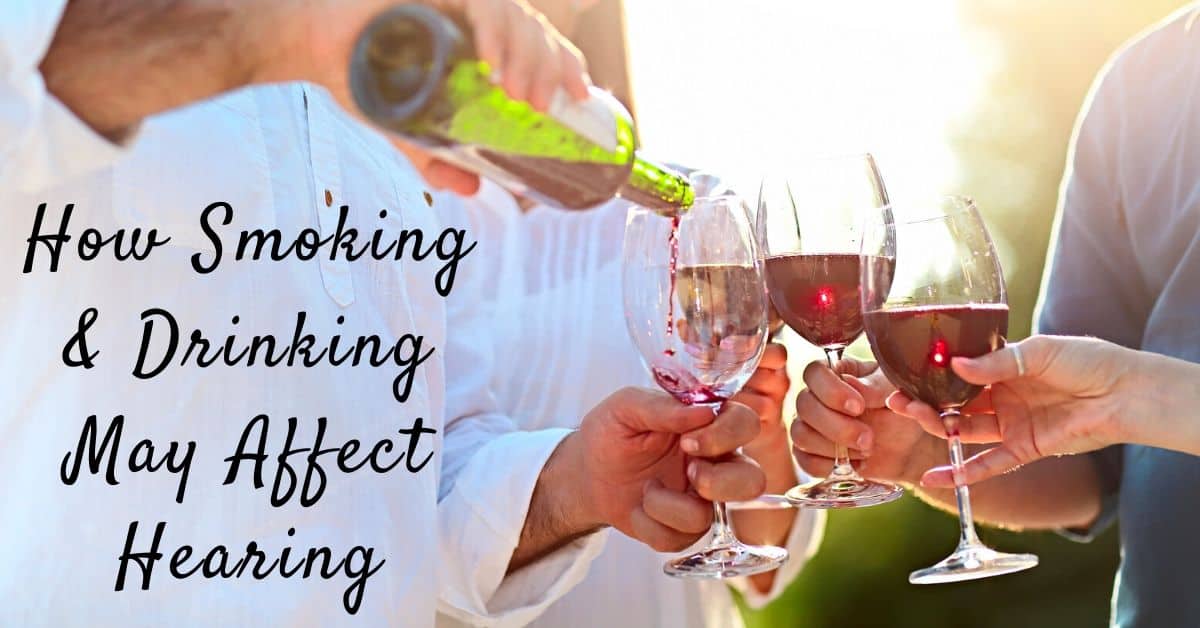 We are always looking for ways to indict the common human vices for our ills. Usually, it is possible. It has long been known that smoking damages the lungs, the heart, the skin, and just about every other part of the body… But what about the ears? It turns out, we don’t know for sure. How about drinking? Does alcohol impair our hearing ability? Like many things related to drinking and life in general, there is a “sweet spot.” Let’s take a look at some of the info.

One of the difficult things about determining whether smoking and drinking affect hearing loss is isolating the variable. The experiment that would demonstrate the unequivocal truth would require isolating groups of people – one in which all members smoke, one where they all drink, and one where they do neither, and they all eat the same thing and have access to the same activities and air quality, light levels, temperature and humidity, etc. The experiment would have to run from the subjects’ births all the way to their deaths. Since this experiment is impractical and unethical, scientists rely on the analysis of statistics to try to figure out the truth.

The problem is that we don’t know what’s causing what. Does smoking cause hearing loss? Well, people who smoke do tend to have more hearing loss than people who don’t, but they’re also more likely to attend loud rock concerts or ride motorcycles. How do we know whether cigarettes are contributing to the hearing loss or whether it is simply a person’s lifestyle that leads them both to smoking and to hearing loss? This is a classic dilemma that we all face whenever we try to perceive truth: we need to remember that correlation (two things both being true) is not the same as causation (one thing causing another). The fact that there is not an elephant in my kitchen does not mean that refrigerators keep elephants away.

Scientists attempt to adjust for variables like occupational noise exposure, lifestyle and age, but the results are simply not 100% verifiable.

Suffice it so say, the jury is still out on whether smoking directly affects hearing ability or not. A study published in Nicotine and Tobacco Research determined that those who smoke 10 cigarettes a day are 40% more likely to have diminished high-frequency hearing than non-smokers, and 10% more likely to have broadband hearing loss (hearing loss that affects both high and low frequencies). Smoking 20 cigarettes a day increased the risk to 70% for high-frequency loss, and 40% for broadband loss.

The fact that the risk increases as smoking increases does seem to indicate that it is cigarettes and not simply lifestyle causing the hearing loss. After all, it seems unlikely that people who smoke twice as much attend twice as many loud rock concerts or ride motorcycles twice as often. Still, all we can do is speculate: it may in fact be the case that people who smoke more are also exposed to more noise, or don’t wear earplugs as consistently, or generally engage in more risky behaviors than those who smoke less or not at all.

A more recent study by the University of Wisconsin-Madison found that smoking had no effect on hearing ability. So it seems more research will be needed to determine whether and how much smoking causes hearing loss.

Again we face the problem of determining whether it is drinking itself or hanging out in loud bars that causes hearing loss. Thanks to studies by the University of Ulm in Germany, we have increasing evidence that alcohol does cause hearing loss (though obviously so does being in a loud environment).

Alcohol causes ototoxicity (poisoned ears), damaging the tiny, hair-like cells known as the cilia, which convert the mechanical energy of sound into the electrical energy that the brain needs to receive for interpretation.

Furthermore, even moderate drinking over a long time can lead to brain shrinkage and nerve damage- the effects of which worsen as consumption increases. This affects all cognitive abilities, and some of those are related to hearing. It can make it harder to understand speech, or can reduce the amount of auditory information that is able to travel through the auditory nerve to the brain.