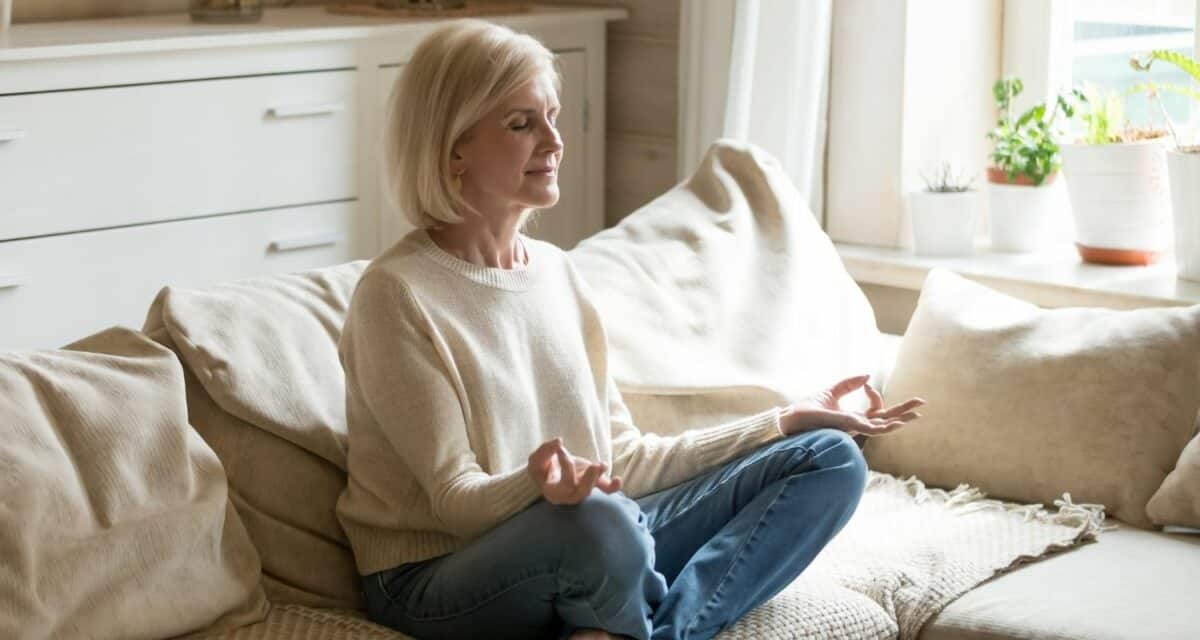 If you are one of the 50 million Americans with tinnitus, you will be all too familiar with that constant sound that follows you through life. For some it is the classic “ringing” in the ears, but others experience buzzing, humming, hissing, whooshing, or roaring sounds, to name a few of the descriptors. What makes tinnitus unique is that the sound originates from within the body. In the case of objective tinnitus, the less common form, there is a part of the body such as a bone or blood vessel making the sound, and a doctor can identify the sound with the right tools.

In the more common form, subjective tinnitus, the sound occurs between the cochlea of the inner ear and the auditory nervous system, meaning that only the individual is able to hear the sound. Many treatments have been devised to deal with tinnitus, but one of the approaches—meditation—might strike you as a strange approach. Anyone with tinnitus will know that a quiet environment can make tinnitus symptoms their very worst. For example, the quiet of a bedroom at night can make tinnitus its loudest, so loud that it becomes impossible to sleep. Why would silent meditation be used as an approach to alleviate tinnitus? Let’s look at some of the methods that are currently in use for tinnitus, as well as what you can do if you want to try them.

For some people, the first attempt at silent meditation can be difficult, and tinnitus can make the process of focusing one’s mind even more troublesome. One of the most common types of meditation is called “Anapana,” and this style encourages the practitioner to simply focus the mind on the breath. This simple instruction can become quite difficult when other thoughts, feelings, and sensations get in the way of training the mind on the breath. If that instruction weren’t difficult enough, tinnitus can become a constant distraction from that focus on the breathing. Rather than observing oneself simply sitting still and breathing, a person with tinnitus can find that sound to be a constant distraction.

For this reason, some have used tinnitus as part of the meditation practice. Rather than focusing on the breathing, these meditators focus the mind on the sound of tinnitus instead! It might seem counterintuitive at first to focus on something that has been a source of annoyance, frustration, and even mental anguish. However, using the sound of tinnitus as the focal point for the meditation practice can bring it under an individual’s control. Each time the mind wanders away from tinnitus, this practitioner will be instructed to bring the mind back to that sound. In effect reversing the source of distraction, this method can be a powerful way to cope with the symptoms of tinnitus. Many who have tried this method find that when they return to normal life, they feel better equipped to deal with their symptoms. Rather than having the sense that tinnitus is encroaching on what they want to experience, they instead feel like they can recognize tinnitus without anxiety or distress.

Although some people find relief from tinnitus symptoms through meditation, this approach is not right for everyone. Other approaches to tinnitus treatment are similarly varied. Some people find relief by turning a fan to high speed, playing a television or radio at a low volume, or using a white noise machine. Particularly at night just before falling asleep, these approaches can help those with tinnitus battle insomnia. Just like meditation, these approaches are not for everyone.

Some of the latest hearing aids can double as a treatment for tinnitus. These devices play a sound that precisely matches the tone of tinnitus yet with a reverse “phase relationship,” effectively canceling out some of the frequencies of tinnitus.

If you are interested in learning more about any of these approaches to tinnitus treatment, including professional devices, don’t hesitate to contact us. We can pair your tinnitus diagnosis with a hearing test to see if you have overlapping conditions and then proceed to consult with you about your individual needs to find the right approaches to treatment.